One of the material planes, it is the homeland of Linley. In the higher planes, this plane had another name which is Necropolis of The Gods. Many Gods from the higher planes and divine planes don't know the name of "Yulan Plane". It existed for more than 4 quadrillion years. 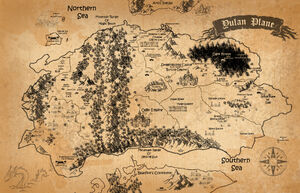 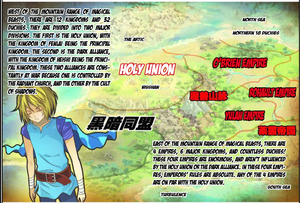 Inside the Yulan Plane is the so-called Yulan Continent.

It is divided into various regions dominated by either humans or magical beasts, it possesses various kingdoms, empires and wild areas. West of the Mountain Range of Magical Beasts, there are twelve kingdoms and thirty-two duchies. Within these kingdoms and dukedoms, there are two major divisions. The first is the Holy Union, with the kingdom of Fenlai being the principal kingdom. The second is the Dark Alliance, with the kingdom of Heishi being the principal kingdom. East of the Mountain Range of Magical Beasts, there are four empires, six major kingdoms, and countless duchies, These four empires are enormous and are not influenced by the Holy Union or the Dark Alliance. The four empires are the central Yulan Empire, the southeastern Rhine Empire, the eastern Rohault Empire, and the northern O’Brien Empire. At the far northern end, the Holy Union shares a border with the O’Brien empire. While at the southern end, the Dark Alliance intersects with the Yulan Empire.

It has a size of roughly thirty thousand kilometers.

Currently, the whole continent is ruled by the Baruch Empire and the Baruch Clan.

Bluefire decided to reinstate his past homeland and name it Bluefire Continent. It took him tremendous effort and he nearly exhausted all DIvine Power from his Earth Divine Clone. His Fire Divine Clone did help his other clone too. After he finished it, he transported a large number of people and Magical Beasts to colonise his newly created continent.

After Linley became a Sovereign in both Earth and Water, he decided to create a Continent of his own, slightly excited by Bluefire creating his. He even went as far as to exert his Sovereign powers and make it so that the small islands around the Yulan continent and the Bluefire continent were all moved within the Dragonblood continent. After he finished it, he transported a large number of people and Magical Beasts to colonise his newly created continent. The people who had been moved over to the Dragonblood continent had decided upon September 24th as the day of the ‘Dragonblood Festival’[1]. Baruch City was the number one city in the Dragonblood Continent, it also shares the name with the capital city of the Baruch Empire in the Yulan Continent.

Retrieved from "https://coiling-dragon.fandom.com/wiki/Yulan_Plane?oldid=10562"
Community content is available under CC-BY-SA unless otherwise noted.